Foobar2000 is an advanced freeware audio player for windows which was developed and is managed by Piotr Pawloski. It came to the market about 12 years ago. It has high customizable options to allow the users design unique applications and features that best suit them. Its user-interface is known to be completely customizable.

It has an extensive Software Development Kit (SDK) that allows even the third party developers to easily and completely replace the user-interface. The whole Foobar2000 package comes with installer as well as portable version for the users to run it using any machine of their choice with a mass storage device without having to add any information to the windows registry.

Foobar2000 core natively supports comparatively a wide range of audio formats and some of them include; MP1, MP2, MP3, MPC, AAC, SND, AU, ALAC, FLAC, WAV, WMA, CD, OGG Vorbis, Speex, WavPack, Opux and AIFF. Foobar2000 comes with a customizable interface, quite advanced capabilities for tagging, and reliable support for audio CD-ripping and using converter components for transcoding all the audio supported formats. This audio player also has the power to read inside ZIP, GZIP an RAR archives. It comes with keyboard shortcuts for equalization and crossfading purposes.

Other optional features of the audio player include viewing options, creating different playlists, CD burning, Kernel streaming, WASAPI output compatibility and third-party support. On the viewing option, the player frame can be set to appear on top of other windows while the activities of the program can be monitored on another console window and scrutinized further by exporting further to a log file. Different playlists can be created on different tabs for ease of access by the user. Moreover, the existing playlists can easily be queued on the audio player. Foobar2000 supports third party, for instance, the audio player can help in streaming last.fm and easy integration with iPod which includes album art support as well as transcoding audio formats that are not supported by the iPod in question.

Foobar2000 is said to be used by approximately 30 million people from all corners of the world, making it a reliable audio player for anyone who prefer a user-friendly audio player with lots of useful features. 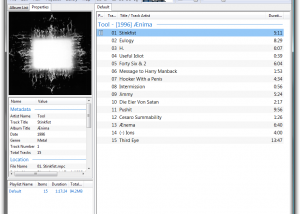 What do you think about foobar2000?