GIMP uses the standard layout used most high-end for-pay image manipulation programs. It is for this reason that news users will have little to no difficulty figuring out where all the knobs are. The newly updated single window feature makes for a cleaner and sleek working environment for a more productive working experience. As would be expected of any image manipulation program, special effect filters, exposure manipulation controls such as levels and curves, color controls, the more simple paintbrush and eraser are just some of the many tools you can expect to be at your disposal, for high-quality image manipulation.

The use of Cairo graphics results in smoother graphics that can be processed in 16 bit and 32-bit modes, integer or float as you please.Multi-column dock windows are especially handy for users working with multiple screens. This feature allows the dialogue and tools to be on one screen and the images on the other.GIMP works with a wide range of image formats such as JPEG, GIF, PSD, PNG, TIFF, Autodesk, FLC, Postscript, Targa, Paintshop Pro PSP among others.

Unlike most programs in the same niche, GIMP’s open-source nature allows users to adjust the program’s code to their liking and share their experimental plugins with others; the chances are that if there is a feature that GIMP doesn’t already offer, one of its many users has created a plugin for it.This also allows for sophisticated scripted image manipulation giving the flexibility to come up with exceptional creations.An added advantage is that GIMP works across major operating system platforms like Windows, Linux and Mac os making it easy to share your work with multiple people as well as devices.

Image layer groups make working on  composite images more fluid and effective. GIMP also uses thumbnails to distinguish your work when using multiple tabs at a go. Another great feature is on-canvas text editing that allows you to manipulate text without opening a separate window. The cage transformation tool is one its more powerful gems. It enables you to make complex changes to specific parts of an image. The cage tool will be invaluable to those looking to correct distorted image perspectives as well as those looking to create dramatic and exaggerated work. 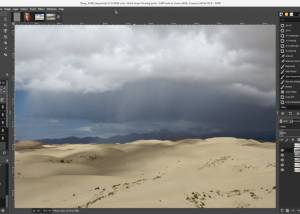 What do you think about GIMP for Windows?

Last versions of GIMP for Windows

Downloads of GIMP for Windows freeware

Freeware alternatives to GIMP for Windows

Paint.NET is free image and photo editing software for PCs that run Windows. It features an intuitive and innovative user interface with support for layers, unlimited undo, special effects, and a wide ...