It is a package from the creator of the Microsoft Office suite to make it possible to access documents previously saved using a newer document version. A newer document cannot necessarily be opened by every version of Microsoft Office; thus, presenting problems for users of earlier Office versions who have not upgraded to a new version. This package turns around the sticky situation for the users.

This patch can help you open, edit, and save files created by new versions of MS Office. It's a surprisingly big download at 37MB that means, if you got a slow connection, you need spend some time to download this service pack and there is not much work left once you install the pack. It can take automatic actions to repair the issues whilst adding support to the Excel Viewer 2003, Word Viewer 2003, and PowerPoint Viewer 2003 to open XSLX, PPTX and DOCX files.

It gives you access to the file formats that were not created when older Microsoft Office suites were developed for helping owners of older version.

This service pack includes earlier unreleased fixes and the public updates, cumulative updates, security updates, and hotfixes that were introduced in February 2009.

Microsoft Office Compatibility Pack SP2 does not add support for either the .pdf (Adobe) or .xps (Microsoft) file type to pre-Office 2007 versions of Word, Excel, or PowerPoint. To view and generate .xps files, use the           Microsoft XPS viewer or Microsoft XPS Essentials Pack. 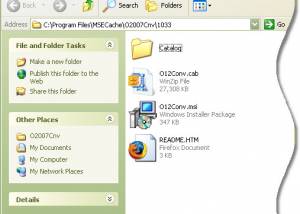 What do you think about Microsoft Office Compatibility Pack for Word, Excel, and PowerPoint 2007 File Formats?