Microsoft OneNote is the only note taking app that currently matches with Evernote on the basis of functionality. Microsoft OneNote is available for Android, Mac and Windows. Although it has features similar to those of Evernote, it's constructed differently. Being free and with great storing capacity, it is covered in Microsoft's own fabric. It has links to other Microsoft apps and One Drive for better functioning.

Evernote has been defining note-taking as well as organizing one’s everyday life. But now Microsoft OneNote is here to change the perception. Recent changes to Evernote's service have upset the users and they have been in search for an alternative since then. The monthly cost for an office 365 is $6.99 and yearly cost is $69.99 whereas Evernote’s rate is $7.99 per month. Thus, you can enjoy Microsoft OneNote at lesser price than Evernote's Premium Subscription fee. With this account, you can get extra space for storage on your account. You will also be able to use Microsoft Office on one phone, one computer and one tablet; and you will keep getting fast updates to your Microsoft Office.

OneNote complies with the look of other Microsoft Office applications and applications for Android, iOS, Windows Phone, and also on Web app.

While reserving the left rail for notebook and section navigation, the OneNote Web app has editing tools and key buttons on the top of the page. In the desktop apps, pages are situated at the right side and sections that look like tabs are at the top.

OneNote’s very useful latest update has been launched in its Android app: the OneNote badge. Similar to Facebook Messenger’s “chat heads,” it pops over your screen, thus enabling you to create one tap new notes.

It syncs multimedia notes with numerous devices and is rich with features that are reliable. It also keeps updated the version history. It has the ability to protect all your content with the password provided by you. 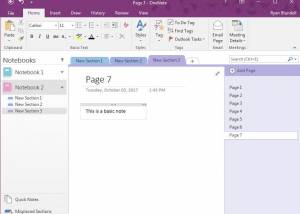 What do you think about Microsoft OneNote 2016?