So what is Prime95, if it’s not a benchmark? Created by George Woltman, Prime95 is a distributed computing project designed to discover new Mersenne prime numbers. It is freeware and available for anyone to download.

If you have a modern PC with Windows, Mac OS X, Linux, or FreeBSD installed, you can participate in the program. Additionally, you will need to have your computer mostly running throughout the day, as well as have internet connection available at least once every two months. Prime95 uses only about 60MB of RAM and 30MB of disk space and sends only several hundreds of bytes every week, so there should be no major impact on the performance of your computer, though it may stress the CPU quite a bit.

You can participate in the program even if you have an older computer. Just keep in mind that the testing may take several months.

However, we would like to stress that Prime95 isn’t a money-making platform. On average, it takes 1-2 years for a new Mersenne prime number to be discovered. So if you thought about making some quick money, you will be disappointed. On the other hand, if you want to help the science of mathematics, why not dedicate your computer to it?

Over the recent years, Prime95 has been highly popular as a stability benchmark among PC enthusiasts and overclockers. Software’s “Torture Test” mode is specifically designed for testing PC subsystem errors to ensure correct operation of Prime95. All in all, the testing features of Prime95 allow you to test a variety of computer components with its preset modes. If you want to go even further, you could select the custom mode and gain more control over the benchmark. 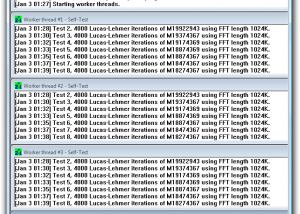 What do you think about Prime95?