Samsung Smart Switch is by far one of the most remarkable apps for switching from one device to another. It comes with a long list of attributes that make it one of the best apps for the transfer of files and data from one device to another. The device has a very simple user interface which features a small number of icons for users to operate the app.

Essentially, the app allows users to seamlessly and conveniently transfer data and files from their old smartphones or computers to their new devices. Most notably, it was meant for Samsung Galaxy users who want to migrate from other smartphones such as Balckberry, iPhone and older android mobile devices. Further, it was also designed to enable mobile phone users to backup their data and files on a PC or Mac and save it for future use. Once the need arises, each of the files can be transferred to your new device. But, the app must be downloaded and installed on the PC or Mac for this to work.

There are numerous ways to transfer the data and files from one device to another. You can use the wireless connection which is supported by most devices. On the other hand, you can also use wired connection such as the USB cable transmission or the wired device-to –device transmission.

You can transfer contacts from your old device to your new one. This feature enables users to avoid losing their old contacts. You can also transfer and backup text messages, call log details, calendar information as well as alarms. Information patterning to your device settings and memos can also be transferred seamlessly and effortlessly.

The app also allows users to transfer a variety of files from their old smartphones to their new ones. They can also back up these files on the computer. This can be achieved in multiple ways. The most notable method that is used is the USB transfer of files. But, this is also possible if iTunes is used.

In order to use the app, you must make sure your devices both have it. The app has to be downloaded installed and installed seperately on each of the devices that will be involved in the transfer.

The app scans and transfers data, apps and any information stored on the device and the SD card. In as far as the transfer of apps is concerned, it is often advisable to download them again in case they do not work properly. But, the app scans for new or similar apps and suggests to the user. 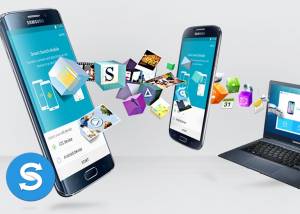 What do you think about Samsung Smart Switch?