ShareX is that has successfully been around for ten years. With its advanced and customizable hotkey system, wide annotation features, and different region capture styles, it is one of the most-used screen capture applications.

ShareX offers an impressive array of capture methods. Its clean white interface has an accessible list of options on the left, including capture methods such as full screen, active monitor, active window, and region capture. The application is also able to grab scrolling image capture for parallax websites that have dynamic backgrounds. This free program is capable of screen recording, producing video grabs in both MP4 and GIF formats.

Different region capture options make it a versatile screen capture tool. By simply drawing on the screen, users can choose from rectangle, ellipse and freehand region captures. An interesting feature that ShareX has is its ability to identify edges on screen, which can be useful when capturing a certain area inside a window. Additional options to hide or show the cursor, as well as capture images after a certain number of seconds (delayed capture) are available. These detailed options enable users to screenshot images based on their exact desired outcome.

When setting up, users can create customizable workflows for automated actions that will be performed immediately after the image is grabbed from the screen. Users can create custom hotkeys that will trigger specific after-capture events. For instance, users can create a hotkey that will immediately send the grabbed image to a certain folder Other after-capture options include saving printing, uploading to a host, and so much more. Another useful feature is their editor, where users can add alter their grabbed images without having to open an external program.

From the editor, different annotations can be added to the image to emphasize certain parts or crop out unnecessary elements. The clean interface makes the process of annotation easy. A tool bar at the top conveniently allows users to choose from a decent number of tools, including shapes, arrows, blur, pixelate and speech balloon. ShareX also includes a few productivity features like color picker, image thumbnailer and monitor test.

After editing, users can send their images to different destinations like Dropbox and Twitter. Its after-upload tasks make screenshotting a hassle-free experience. Without having to move to another program or window, ShareX can let users shorten, share and copy URLs. 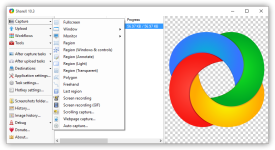 What do you think about ShareX?