Trelby is an easy to use screenwriting program that is used extensively today. It comes with an elegant user interface aimed at streamlining the screenwriting process. The software is free for any user and can be customized to suit the needs of the user. You can also configure it limitlessly.

Trelby is mainly renowned for its great combination of features. It has a comprehensive collection of features that makes it useful for the execution of any kind of screenwriting task.  It has the screenplay editor which is readily available for users to edit their screenwriting tasks in real time. There is a spell check feature, pagination and auto completion in real time. The software can function on multiple platforms. In all instances, it is able to deliver amazing performance results.

The software enables users to generate reports in a systematic manner leading to a standard report featuring dialogues, scenes, character identification marks (or characters themselves) and location. Users have a chance to store many character names thanks to the software’s data base featuring over 200, 000 names from a variety of countries around the globe.

Users can also compare various scripts and immediately deduce the changes that had occurred in each new version. There is also an import feature which allows users to import screenplay formatted texts, adobe story and even final draft xml. Others include fade in pro, celtx and fountain. Users have a chance to export to screenplays in various file formats including PDF, Final draft, html, formatted text, rich text formats and even fountain.

The software does not only allow users to export their screenplays as PDFs, but also features a wide range of integrated features for the configuration of PDF. Imbed your own choice of font and generate PDF files of any kind using your own preferred watermarks.

Being free, the software is open to anyone who wants to use it. Further, Trelby is open to any changes as desired by other developers. It is readily available to developers who wish to incorporate any new features. 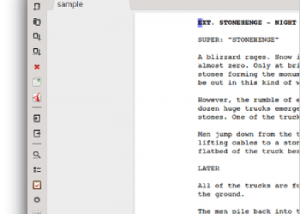 What do you think about Trelby?