CodePlex is Microsoft's open source software where they also have the free download of a virtual router. The virtual router can be run on computers that have Windows 8, Windows 7, or Windows Server 2008. Using Codeplex virtual router the user can share whichever internet connection they have which include WiFi, LAN, Cable Modem, dial-up cellular with any other WiFi device such as a Laptop, smartphone, iPod Touch, iPhone and Android phone.

These devices connect to the Virtual Router just like you would with any other access point and the connection is secured by WPA2 and is one the most secure wireless encryption. The virtual router can be used in your home, office, school or anywhere that you want to have a router to your mobile device.

Virtual Router has no adverts and this is advantageous because it does not track your web traffic like other free ad-supported applications. The WPA2 encryption cannot be turned off ensuring that whenever you are using your device as a

router that you have the safest connection. You are able to name the virtual wireless network whatever you like and also set the password.

The Virtual Router was only one of the projects that CodePlex was running and after 11 years it has decided to shut down as an open source project sharing website. Codeplex has had its problems in 2015 with a lot of scams that used the site and since then a lot of the users have migrated to other sites.  It has been decided that CodePlex will also migrate to GitHub. In fact, Microsoft GitHub organisation now has more than 16000 open source contributors.

So it has come time to close CodePlex but like all these types of closures they take time and at this time CodePlex have disabled the ability to post any new projects and by October it will be read only and cease to exist by December 2017.

At that time it will be purely read-only where a person can browse through all the published projects and it will be exactly as they will look in October 2017.

To assist the user there will be a streamlined import experience to bring the CodePlex source code, license and documentation to GitHub.  CodePlex support staff are prepared to help with any assistance that is required as well as the GitHub support staff. 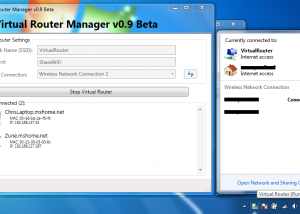 What do you think about Virtual Router?