The program allows to run various internal Windows tools as well as free third-party tools from its own graphical interface, ensuring their automatic download and subsequent installation.

Another group of tools are antivirus applications from reputable manufacturers and various alternative scanners, Windows update modules, Java, Adobe Flash and Adobe Reader, as well as system optimization tools (Windows Repair All In One, CCleaner, DiskDefrag).

The third group of tools can be arbitrarily defined according to the specified template and exported to a file for later use
the last group is testing the functionality of various components of the operating system, such as test for the presence of Flash Player, Java, individual Microsoft Office components, PDF viewer, MP3 and AVI player, check Windows version and default Internet browser, internet connection speed, test webcam and microphone, etc.

Running of selected functions (removal of malicious applications, cleaning of the system, or its repair and defragmentation of the disk) can also be carried out automatically with the possibility to send the report of the repair progress in the form of an e-mail message to the administrator.

When you uninstall a program, all third-party applications installed through it are automatically uninstalled.
The manufacturer also provides a portable version without the need to install it on the system disk. 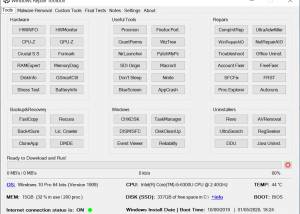 What do you think about Windows Repair Toolbox?