The World of Warplanes is everything that gaming lover like to handle. Obviously, blasting enemy tankers is quite cool and the strings of the victories in various fights and it can be quite exhilarating.

But don’t you think it would quite cooler if such kind of experience on huge scale can get bigger and with a great amount of cohesion. This is where the Clans come into being. And the best thing about the World of Warplanes is that like World of Tanks. Basically, the highest and the best feature is that it has become better and bigger than what you have imagined.

So, instead of just allowing the creation of groups for players in a single game, there is a great amount of Common Clan System which allows tankers and pilots to enjoy and play in a single Clan and through the War gaming titles. In addition, there are quite a lot of advantages with regard to playing the World of Warplanes. The first and foremost thing is the availability of the same clan and name tag.

Basically, the name of the clan is simply shared all over the Wargaming titles. So, by this means, individuals who play the game will be easy to know you and where the clan created by you go. Another feature is the same group players. You can ensure that the band of brother that you have never gets broken. Further, you can ensure that the clan gets brethren along your side regardless of which and how the Wargaming title gets played.

Another extensive feature is the fund available for the common clan. Basically, the gold which you would be earning as a member of the clan would be simply be there in all other games and even in which your clan is there. Now the big question is how to proceed in playing this game or knowing the enjoyment of this game. So, if you are a part of the World of Tank Clan, then you can easily be able to access and enjoy the World of Warplanes within the same groups.

First thing that you need to do is login in in usual manner and then get access to the private chat of the Clan from any game that you want to play. Nowadays, all the clans have got their own dedicated profile of the clan page present in the website of the World of Warplanes giving the Commander the as usual management options. 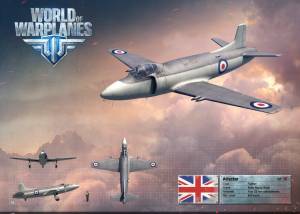 What do you think about World of Warplanes?

Last versions of World of Warplanes

Downloads of World of Warplanes freeware