Apocalypse Motor Racers is a popular 3D combat racing game. It makes the game to be full of action packed fun. This software is intended for teenagers and school pupils, females and males, who are enthusiasts of small games. The major feature of this software include high definition graphics, number of game play features, action packed gameplay, high performance features, three dimensional graphics, easy to play and low file size. It is these features of software that make it to be different from other related software available in the market.

While speaking about the game theme, in the beginning of twenty first century, world war III wakened the global energy crisis. A number of cities were destroyed and it was left abandoned by the people looking for better life. These abandoned cities are utilized as the race tracks to achieve a completely new scene of popular entertainment from Apocalypse motor racing. Daredevils of various parts of the world drive to triumph through wrecked vehicles of their competitors in this dreadful racing. Being a very ideal 3D car racing game, it deals with rockets, weapons and mines present on the cars to compete against the other racers. The mission is very simple as it claims to reach the finish line as the initial position. But it will not depend on speed, however lucky in fight. Every racer will aim other cars to shoot down in order to protect them from reaching the first place.

The game features the nitro boost so as to drive the car very faster. But, the gamer must use it on an efficient manner as it is finite. The usage of weapon and nitro effectively will bring you the benefit of winning the other racers. The controls that are used in the game include arrow keys to steer, X for fire weapon, C for fire rocket, V for fire mine, CTRL for nitro boost, R for reset car and Esc for Pause. The developer of this game is gamehitzone.com and it is one of the popular software for simulation games. This software can be easily downloaded to the system and installed. As the file size of this software is small it can be easily installed and played with no much effort. 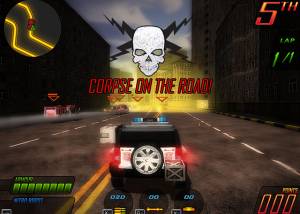 What do you think about Apocalypse Motor Racers?