AnyBurn disc burning tool is not your ordinary disc burner. It comes with the basics that allow you to copy a disc, erase rewritable discs and also allows you to create data discs (DVD, CD or Blu-ray). But this tool also features other functions like the ability to create audio CDs from FLAC, APE, WAV, WMA and MP3 files.

This CB burn tool can be used for creating a bootable USB drive for Linux, Windows 7, 8, or 10. It is compatible with various Windows Operating Systems including Windows 7, 8, 8.1, Windows Vista, Windows 2000, Windows 2003 and Windows XP. Your system must also be Intel Pentium 166MHz or above this. This software, however, supports both 32-bit and 64-bit Windows and the system should have a 64MB memory for it to work flawlessly. Moreover, for this burner program to be used in a computer system, it should have a CD, DVD or Blue-ray drive and a hard disk space of at least 10MB or more.

AnyBurn features many packages. In some of the larger packages, there are disc image-related tools that allow you to create BIN/CUE or ISO images from folders, files or discs. There are also packages that will allow you to convert some od IMG formats to ISO for flexibility.

AnyBurn can be used to burn an audio CD that can be played through any regular CD player including WMA, FLAC, APE, M4A, and MP3. In addition to this, it can Rip Audio CDs to different formats including MP3, WMA, APE, WAV and FLAC.

When copying discs, AnyBurn uses the sector-by-sector method. Not only does this make the disc copying faster, it also ensures that it is copied systematically. 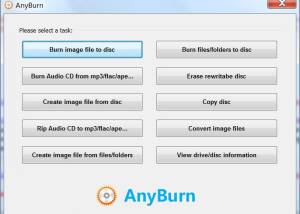 What do you think about AnyBurn?