Users with Media Player Morpher can create and manage number of media libraries and playlist that will run nonstop as playback. One can also set the fading in and out ratio to a file without loss in the quality of the output. It works fast and processes command with high speed. It can process media files in single and in batch process mode. Quickly edit, cut, crop, paste, drag and drop your desired media file with your favorite modification or simply create a new improvised and featured one.

An important identify of the editor is it also works as a converter between different file formats of the media files. Thus, users can download or select files in and from a streaming site to collect and improvise later. It also functions as a audio grabber, a recorder and a media uploader. Very few free to download multimedia editors combine such great range of functional capabilities together to a single platform with simplified user interface. 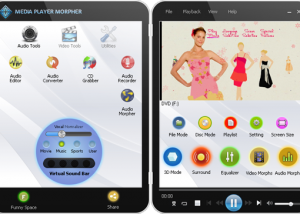 What do you think about Media Player Morpher?