MediaMonkey is a music management software. It is a digital media player and also a media library for individuals who are pretty serious about music. This software best suited the musical needs of both professional and amateur DJs and also the big music companies. MediaMonkey for Windows was developed by Ventis Media Inc.

Topten Reviews, a website that reviews different software, describes MediaMonkey as “the best MP3 software for organizing your collection.” According to Topten Reviews, this software not only plays your files but also updates necessary information with its ability to download file information from sites like Amazon and Wikipedia. But it can only do this if it is connected to the internet.

Another thing that MediaMonkey does that other music software can’t do easily is that it assists you in finding all the media files from your drives. Once it does that, it can sort all the files out into different categories, such as subgenres. It also has the power to get rid of duplicate files upon their detection.

The latest version of the software which is MediaMonkey Version 4 has both free features and Gold features. Free features have the basic media player features like any other music software while Gold Features unlock some advanced features, such us customization, segmentation of files, organize files automatically, auto-conversion and leveling and professional & quality CD ripping among other features.

MediaMonkey is characterized as easy and quick to use whether adding new songs to media library or playlist or just changing the media interface. MediaMonkey’s interface looks similar to iTunes but you can customize it to look differently. This is an additional feature which helps in putting the music management task one step ahead from most of other media players. 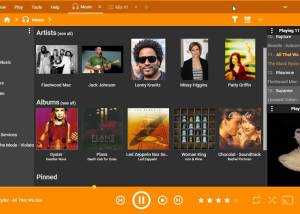 What do you think about MediaMonkey?