The AxCrypt is one of the premium and the best open source encryption (file) software of the Windows. It is so easy to use and integrates quite easily in the Windows OS in order to decrypt, compress, encrypt, send, store and work with various individual contents and files.

The AxCrypt has got extensive features which makes it quite different and apart from other encryption tools. One is the double click option to view and edit with any kind of app. Then there is the automatic re-encrypotion which occurs after modification and the non-requirement of the no user configuration which is often occurs before the usage. In addition, the AxCrypt has the extensive feature of the open source under the license of the General Public and even the twelve language combined into a single package makes it quite executable.

The AxCrypt has got a good and extensive command line interface which makes it suitable for programming and scripting. Another extensive feature is that this tool is quite compatible with Windows OS like 2003, Vista, XP, 2008, etc. and even the 64-bit programming. The tool is even encrypted in AES with the 128 bit keys and you can even edit the encrypted documents easily through double clicking. The tool even has an optional pass phrase cache, which is a simple one type phrase per each logon or the simple reboot.

The automatic pass phrase or the validation especially before editing and decryption is one of the best features. Even the extensive feature of the easy-file support and generation and the no user interface or option makes it quite easy to use and install. In addition, the tool is relatively light-weighted and easy to use, i.e. requiring about 1 MB to download. In addition, it has got extensive command-line interface and server mode details. Another extensive feature is the supporting of files and data which are more than 4 GB.

The dynamic brute command and force which is commonly used in measuring helps in the iterative key wrapping and also helps in integrating quite well using the web based file and data sharing services. You can even do the selective compression especially before encryptions like faster uploads and download. Even one can retain the original file information and file name of the encrypted files. Further, the extensive feature of integrated shredder and one can even shred the encrypted and temporary files especially the plaintext ones.

Also the AxCrypt has the secure memory handling feature which allows no data or keys in the page file. Plus it has got industry standard codings and algorithm along with the verification and data integrity which is not detected and modifications. 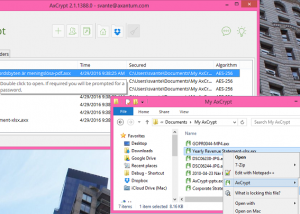 What do you think about AxCrypt?

Get the latest freeware updates and news directly in your inbox. By clicking on "Subscribe" above, you are agreeing to the Terms of Use and the Privacy Policy.
© 2023 TopFreeware  |  All rights reserved.
created by FAUST