While Android devices provide their owners with quite a wide range of customization options, sometimes, it is not enough. Rooting is done to push the boundaries away and allow your smartphone to achieve more capabilities. However, in recent years, you would have to dig deep into the forums to find the necessary scripts to then root your Android device. Unfortunately, this often did not work out from the first try, and even might have turned your smartphone into a brick.

Kingo Android ROOT allows you to worry about those issues no longer. With it, rooting your Android smartphone is just a deal of a few clicks. The success rate of Kingo Android ROOT is much higher, though the process may still fail. In this case, you can just start over until you succeed.

Kingo Android ROOT works perfectly with any Android smartphone, be it a Samsung, LG, Google, Meizu, or any other device. This also applies to existing Android versions.

Kingo Android ROOT is available for PC and Android. To download the Android version, you would have to visit the developers‘ site and get the app from there. Then, rooting is just a matter of a couple of clicks. Be mindful though that the success rate on PC is much higher due to technical reasons, so if you fail repeatedly trying to root your smartphone through the Android app, you should try from the PC version.

Another advantage is that with Kingo Android ROOT, you theoretically won’t lose your data, but this is not always the case, unfortunately. While the developers work hard to ensure the safety of the process, you should backup your data just in case.

If something goes wrong and you fail to root your device no matter how many times you try, the support center of the developer is always available. Provide them with as much info as you got, including the manufacturer of your device, model, and Android version. They also accept log files.

However, you should keep in mind that rooting your smartphone voids your warranty on the device as tampering with the devices is strictly banned by manufacturers. Root at your own risk, but if you do want to keep the warranty, avoid rooting your Android device altogether. 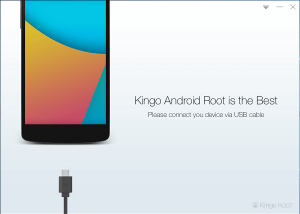 What do you think about Kingo Android Root?