LangOver is a user friendly tool with a simple to understand, brief and direct user interface. This software application supports virtually any languages that the user works with yet easy to configure. This tool supports a change language feature that helps the user to switch between languages; the user is allowed to change any language to another language that they are in need of (e.g. from English to French in case the user wants French).

This software supports a translate feature which enables the user to translate their text from any language to any language with Google software translator. With the tool’s reverse feature the user is able to command the tool to reverse the text and it does it instantly. Furthermore, in this feature, the user is granted with two options and these include: Option to reverse the whole sentence and Option to reverse only the words.

This tool uses a chain of Wizards and screens accessed from the system tray. The tool allows the user to customize their languages, keys and many more. The tool lets the user to redefine keyboard layout and correct texts at a spot. 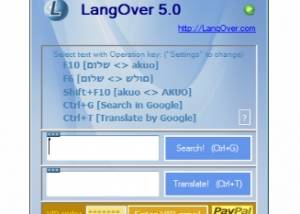 What do you think about LangOver?