Lingopad does not require connection to the internet.  It presents an eye – catching user interface containing a standard panel on the left hand side showing word lists and the right hand side panel presenting a dictionary with translations and a useful phrasebook.

This tool’s default languages are English- Germany and it holds 230,000 words. Lingopad is a multilingual tool tough by default it contains English and Germany but it supports a download feature which allows the user to download other languages of their interest.

With this tool, the user is able of accessing more different languages dictionaries online like Norwegian, Spanish, Turkish, Chinese, and Japanese, the user is free to download any of them or them all into their tool. This tool chains a reference and keywords feature whereby it holds over 80,000 keywords and 600,000 references in English, Germany, Italian, Turkish, French, Japanese, Kurdish, Spanish and Japanese.

Lingopad features a search option feature; the tool can also undertake research with the beginning, centre end of the word.  Lingopad supports a pronunciation feature which helps the user to know or learn the proper pronunciation of English or German words. This tool also proffers phonetic transcription for several English words.

This tool contains direct links that help the user to find words on Wikipedia and different search engines. The tool also keeps and displays the list of latest search words. The tool supports an automatic search feature for tagged words or words from the clipboard. It also supports a hotkey feature. 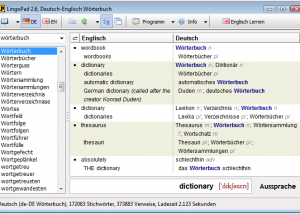 What do you think about LingoPad?

... because the keyboard layout was in a wrong language. LangOver will fix it. With LangOver 5.0 you'll be able to convert your text quickly between languages. Just Click 'F10' and your text will be ...