oCam is a simple program that enables users to capture video and still images through a small main window that serves as its primary interface. Free for home use, oCam delivers basic screen recording functions for uncomplicated screen capture.

Screen capture is efficient with oCam. With the use of customizable hotkeys, screen recording can be done with just one press of the button. Easy pausing and playing of the recording is attainable through the quick assignment of keyboard shortcuts.

From the Options window, users can set video recording options including video format, quality, and FPS (frames per second). These options will come in handy during the editing process. They can also select whether or not to display the cursor when recording, and set a time limit for screen recording.

The program sets the recording region with a rectangular green capture box with adjustable buttons on its edges. There are also preset region recording sizes that are available in the menu, including full screen and standard YouTube dimensions. Another great feature that oCam has is its ability to identify multiple monitors, and it allows you to choose which monitor to record from.

oCam screen recording supports a wide variety of built-in video codecs which include AVI, GIF, MP4, and MOV among others. Its built-in audio codecs (MP3, AAC, and FLAC) make audio-video recording possible, but users can still choose video recording alone. This is useful when users want to edit their videos and add other music using an advanced editor after screen recording.

In-game recording is also available in oCam . The program can identify which window has the gamethat the user wishes to record. All that one needs to do is wait for the convenient Game button to turn red, before switching to the in-game window. The FPS monitor will appear on the upper left during screen recording. Stopping and starting in-game recording is easily achieved through the assignment of shortcut keys.

Primarily a video-recording program, oCam still offers the option to capture still images on screen. An icon on the main program window triggers image capture. The image capture region can be adjusted using the same principe used for video recording, specifically through the green rectangle.

Although there aren’t any after-capture or after-recording editing options, oCam does offer the option to add watermarks to the captured content. All captured and recorded content will then be immediately saved in a default folder. 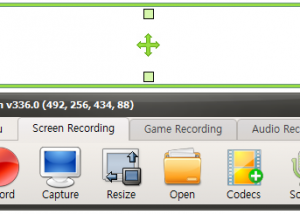 What do you think about oCam?