The Webcam/Screen Video Capture is one of the best program to capture all kinds of video from recording devices like video cameras (streaming), webcams, and video calling devices or any type of computer devices. Convenience is what makes this tool a great thing.

In addition, one does not need any kind of experience in capturing the video from the screen or webcam. With a simple click of a button, all the recording can be done. Also while the video is getting recorded, along with that the audio gets recorded too. Another extensive feature of this tool is that it provides multiple image and text overlays thereby, helping you to create videos along with time, text, logo, and the list goes on and on.

An interesting aspect is that you can add the filtering effect and easily generate a good amount of video. Even there is a frame capture functionality i.e. the burst mode supporting and this can help in grabbing the frames which you need for the image files. The Webcam/Screen Video Capture is designed in such a manner that it has got extensive and wide varieties of video capturing aspects and surprising thing is that there are various kinds of video captivating features and even more things to explore.

Now the Webcam/Screen Video Capture is a straight forward video captivating tool and software application that does things which it exactly can do. It can easily help in capturing and recording videos from the USB camera, digital camera, webcam, video input devices, PCI card, etc.

In addition, the Webcam/Screen Video Capture gives the extensive feature of capturing images which are located up to 30 fps from the given network internet protocol camera which helps in broadcasting live video and audio streams online. An interesting aspect is that one can easily enter the authenticated password and ID and even send commands to the remote controlled camera as per the need of the user.

Basically, this is the easiest way to create a good surveillance audio and video to keep an watch on the office, home, parking area, garage, etc. It simply turns your PC into a system that does video surveillance. Now working like a handy or simple screen capturing app, the Webcam/Screen Video Capture is free and has the basic ability to record all the actions performed on the screen and record them into the video in the real time without or with then cursor.

In addition, using this tool you can record the various screen activity on the main monitor and that too in a multi-monitoring system. All you have to do is record the personal computer apps so that it can be used to demonstrate the product, create tutorial, display the presentation, and do the various website reviews. The Webcam/Screen Video Capture is a new age video and web recording tool.

The Webcam/Screen Video Capture is one of the new generation web based video recording too which has got some extension superior tool, letting for easy recording and streaming video from various video websites. Basically, this video recording can assist in capturing all the favorite videos that an individual wants like live sports, music videos, TV shows, video blogs, etc. All videos which are often played on the media player and web browser that are filled with enjoyment are played on these portable devices.

In addition, the Webcam/Screen Video Capture has got an inbuilt feature making this one of the best screen capture tool that can assist in recording an entire screen or any of the selected part of a video. Basically, the previewer would allow one to just zoom by dragging the slider or scrolling the wheel of the mouse. So, this would allow one to choose any kind of region by just monitoring the slider either horizontally or vertically based on the given x or y axis bar when needed.

Another extensive feature is recording the audio. While capturing the video, you can even simultaneously be able to capture the audio from the given microphone, audio mixer, telephone line and other kinds of input devices. The audio quality with a lot of options like audio frequency from a simple 8000 to normal 48000Hz, and even bitrate from a normal 8 to 16 and there is an even chances of getting stereo or mono channel. This way, it would be a great thing and means to create a nice video protection including the one which has your voice, even recording of video conferences and getting similar occasions that would require one to have some audio requirements.

While taking into account of the features of Webcam/Screen Video Capture, you would need to know about the output formats. There are different outputs of video formats available and which can be used for providing users with codes that can provide output files like MKV, ASF, AVI, MPG, MP4, FLV, DV, MPG, Multiplexer, etc. Among such format, there is one called Send to DV feature for sending the given video or audio to a given DV device like the DV camcorder to get a huge high quality copies that would let one to dust off and rencode anytime in the given future and also help in combining the high quality copies of the one which you can dust off and even help in encoding in the future.

The multiplex present in this would be consisting of various signals like fax, voice, data which range from a single medium that can transfer digitally from a given CD player to any other digital device like mobile device, computer, etc. The Webcam/Screen Video Capture helps one to select the given audio and videos codec in your PC and this contains detailed settings which can help in recording a good quality from the source or the video file. In case if the recording fails either for the fault of the compressor not being suitable, this program would indefinitely show the various warning and errors information thereby reminding you to select the proper ones.

At times most of us have to wait for a long time in front of the PC for recording. But with Webcam/Screen Video Capture, just be relaxed as you can create the various schedules and task based on the built-in record time that is present in this tool. Plus this tool helps in creating and setting up schedule so that one can stop or start recording and create a new kind of recording that is automatically available after a certain period of time.

Now as much as you try to preset the task, you could leave the Webcam/Screen Video Capture without any kind of supervision. In case, it you want to grab a single frame or a great amount of video, still you can use the photo. It is interesting to know that Webcam/Screen Video Capture is a good assistant for recording. With the presences of the inbuilt frame grabbing, one can still get various images from the screen or the webcam in a single shot either through a burst mode, thereby saving the given image as JPEG or BMP format thereby saving and formating the clipboard for proper usage.

The Webcam/Screen Video Capture is now available for getting huge kinds of frames to skip as well as take between the capture. So, in the meantime one can adjust the given width and height that are present in the frames and even zooming of the size. Another extensive feature is the multiple overlays. It helps in adding images or text overlay on the given video recording which is quite useful for copyrighting the video and adding the logo on the screen and adding the time and date. 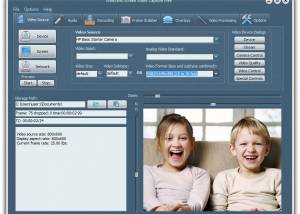 What do you think about Webcam/Screen Video Capture Free?