Web Cartoon Maker is easy animation software that can create full-length animated films or shorts. It also doubles as a way for beginners, especially students, to learn the basic programming language C++. The animation tool is completely free, and can be downloaded on any Windows device.

The program supports objects in the following categories: image, text, and characters. These objects can be motified or coded in the same manner. The program opens with a wide and clean interface. The entire upper portion contains the menu and task bar, while most of the window displays a large space for coding. Users can preview their creations as they code. When satisfied, all users have to do is export their projects, which will be saved in AVI format.

Unlike most animation programs, Web Cartoon Maker allows its users to have more control over the movements of its objects. Its objects are made of multiple parts that have multiple functions, which are reflected on the script used to animate the characters. For instance, a human character will have several parts such as the head, right arm, left arm, mouth, left leg, and so on. This complexity results in more fluid motions and a more realistic appearance of the characters. The user will simply have to program each body part to correspond to the action that they would like the object to make. For instance, walking would require codes for both the left and right leg to move at different angles and coordinates. The program has premade characters that are free to download and use, but users are free to create their own characters.

Because the program is script-based, there is more versatility to the animated objects. For example, objects can appear and disappear by simply typing “.SetVisible” and  “.ChangeTransparency”.

Non-programmers may find the program to be intimidating, but Web Cartoon Maker promises a stress-free experience. On their website, they have helpful tutorials that will guide the user from start to finish. The complexity of the animated short will depend on the willingness of the user to learn how to code. Advanced coding knowledge does help, but it is not required. Anyone, even kids, can use Web Cartoon Maker. 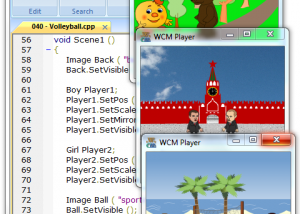 What do you think about Web Cartoon Maker?